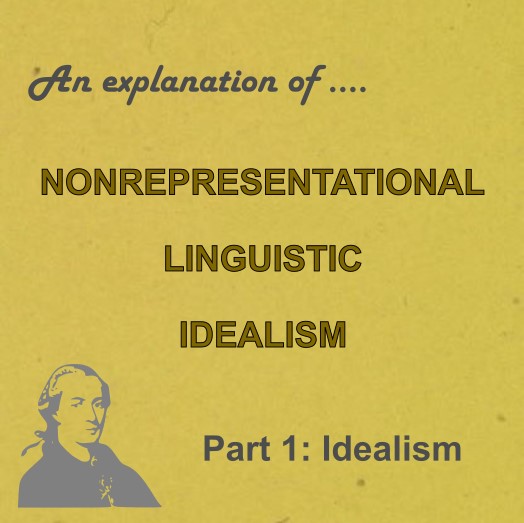 Nonrepresentational Linguistic Idealism (NLI) is a philosophical position that puts the mind at the centre of reality and language at the centre of the mind. It asserts that thought is linguistic in nature and we can only ever be conscious of linguistic ideas. Language does not represent the physical world but is the world itself. We are language in effect.

This post is one of a series of three in which each term in the title ‘nonrepresentational linguistic idealism’ is explained. Part 2 is here are part 3 is here.

Idealism is the belief (or rather philosophical position) that reality as we know it is mentally constructed. Nothing exists which is independent of the mind, the human mind that is. The mind is given priority over the material world. Philosophers, such as Kant, Berkeley, and Hegel, have emphasized the mind over material in varying degrees.

The position contrasts to some extent with ‘realism’ – the belief that the physical world exists independently of observers. This position holds that there are entities or facts that exist which are in some way independent of our minds. While realism and idealism may seem like opposite sides of the coin the difference really is one of emphasis or viewpoint. Realists put the material world at the centre while idealists put the human mind at the centre when trying to make sense of our existence. It is probably true to say that the dominant school of thought in the sciences and philosophy today is realism although idealism seems to be making a comeback of sorts.

Emmanuel Kant is sometimes said to be the modern-day father of idealism. Writing in the 1700s, Kant’s belief was that we have innate structures that link us to rational thought (a priori). These innate structures are waiting to be unleased but can only be done so through experience of the world. The a priori is not something simply to be discovered through rational introspection but is gained through experience of the material world. Thus while Kant rejected the tabula rasa views of Locke and Hume – his predecessors – he believed that it was necessary for the human mind to experience its environment in order to develop a coherent and valid representation of it.

Kant’s version of idealism is termed transcendental idealism although there are several other flavours of idealism:

My own view of idealism in NLI is a combination of ontological and alethic in some form. The mind (language as I will claim in my next post) is central not only for facts (what is the case) but also for what there is. However I am wary of cementing my position to a name because I think it can only really be understood once all the components of NLI have be explicated.

One issue with idealism that is often brought up is that if the material world is somewhat dependent on the mind, what happens when there are no human minds around to observe the material world. For example, there were no human minds around to observe the dinosaurs on earth so does that mean the dinosaurs never existed. I do not think that idealism entails this proposition. Some creatures did roam the earth many millions of years ago but that era is indeterminate to us now. In other words we leave it to the physical – material world to handle that. Whatever creatures there were, and however they lived and moved around, the physical world had no need of the human mind to bring them into existence. Idealism is more about the centrality of the human mind now as we look back in to the past from our vantage point (the vantage point of the human mind – or at least my human mind).

I can demonstrate the two different outlooks with the diagrams below. In the first diagram we have the human eye (the mind) all pervading and omnipresent looking down on the material world from the birth of the universe until today (and into the future). The diagram suggest that there is an all-present mind to make sense of the world and to ensure that dinosaurs, among other things, can exist. The mind of God or a cosmic mind as some have called it. While this view of idealism might be termed ‘absolute idealism’ it is not my form of idealism.

My form of idealism is shown in the second diagram in which modern man and woman with their modern minds (eye) look back on history from their current vantage point. And in this situation dinosaurs certainly did roam the earth many millions of years ago as evidence by the bones and fossils that we find today. But there is no mind’s eye at the time of the dinosaur’s existence.

There is a subtle difference between the two diagrams which some readers might not appreciate. In the first diagram there is an attempt to provide a mindful (linguistic) explanation to the material world at all points in history whilst in the second there is a ‘now-centric’ view of the world. In the second diagram there is an assumption that the physical world got on okay without the human mind in the way that physical words do before we got here. Idealism therefore does not reject a physical, material world but assumes that it is indeterminate to the human mind. (An analogy can be made with Schrodinger’s cat in which the cat is both dead and alive until we cats our eyes on it. The physical world takes care of the dead and alive paradox perfectly fine until our human mind arrives.)

Idealism is the basis for NLI but it is only with the other two components – the linguistic and the nonrepresentational – that it truly comes into its own. I will outline these two constructs in part 2 and part 3.