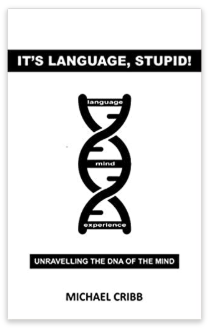 Ever thought there might be something missing from our understanding of the universe? Ever thought there may be some extra dimension curled up, hidden away right in front of us? What if language was that dimension, a fifth dimension in the fabric of the universe which unfurls itself whenever we think, speak or write? We all have access to this hidden world, or you wouldn’t be here reading this. Don’t pretend that you don’t! To use language is to broadcast our minds and expose our conscious thoughts. We orchestrate our societies in language – history, science, law, politics, and public discourse would not endure without language. The world would not exist without language! Come on a journey across, through and down this dimension to unravel the DNA of the mind. Along the way we’ll talk with AI, sneak a peek at infinity, and dabble in Quantum Mechanics. But it will be language which takes centre stage and language which ultimately reveals what it means to be human.

Available on Amazon in paperback or eBook.

A defence of nonrepresentational linguistic idealism.