A Cascade of Slips 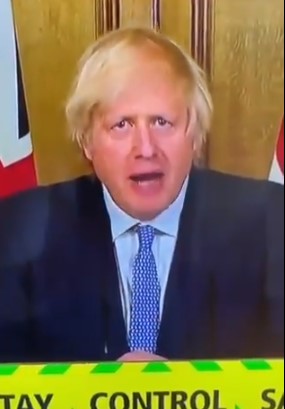 A single speech error (slip of the tongue) often cascades into multiple errors within the space of a few words as Boris Johnson found out yesterday. This has to be one of the all-time great slips that linguists will be analysing for years to come.

Johnson was speaking at the Government’s daily briefing on coronavirus (COVID-19). His intended target was ‘contact tracing’ in line 08 but he had to go through quite a tortuous route to get to it.

The trail of events starts in line 03 and this initiates a series of slips which cascade right through to line 08 where an exasperated Johnson spits out the correct phrase. (You can listen to the audio on the link below the transcript.)

There appears to be a number of competing issues here. First we have the search for the word ‘tracing’ in lines 03 to 06. It seems like Johnson is searching for an /r/ sound.

But just as he seems to sort out the ‘tracing’ part of the phrase, he suddenly loses the ‘contact’ part and goes on a search for this in lines 07 and 08 – searching for the final /t/ but also suffering from an intrusive /r/.

One general rule for slips of the tongue is known as lexical bias: we tend to substitute actual lexical items for target words rather than just substituting nonsense words. Most of the words in Johnson’s cascade of slips are true words, but the status of ‘contack’ /kɒntæk/ is dubious.

Contack is a game with triangles from the 1930s although most people would probably not recognise this word as such. Whether Johnson still plays this game is perhaps, like Johnson’s penchant for painting model buses out of boxes, something we will never know.

Slips of the tongue like the one above are notoriously difficult to get out of the system. There is a good chance Johnson will make the same mistake the next time he is called to say ‘contact tracing’. He might do well to get his speech writers to give him ‘tracing the contacts’ instead.

psycholinguistics, slips of the tongue