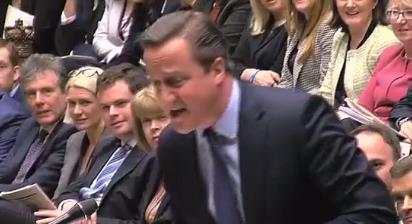 Slips of the tongue can be embarrassing for anyone speaking in public, but when the slip occurs twice in quick succession, one has to ask whether the speaker subconsciously really wanted to say something different. David Cameron (DC) was outlining during PMQs the tough steps the government had taken against ‘unscrupulous employers’ under his premiership when he mistook the word ‘employees’ for ‘employers’ – a reasonable mistake to make you might think. But then a few sentences later the same slip occurred. This time he couldn’t get away with the mistake and certain members of the chamber signalled through their noise and laughter the irony of the slip: Cameron has often been accused by the opposition benches of supporting business employers over and above workers.

The first slip of the tongue in line 08 would be classed as ‘word substitution’ or more colloquially a ‘Freudian slip’. The speaker meant to say ‘employer’ but in fact uttered ‘employees’. We can see why this substitution might occur because of the words’ proximity in pronunciation and meaning (converses). A more sinister interpretation might be that the slip  reveals a repressed thought: Cameron would prefer to crack down on workers than business owners, although modern applied linguistics would not go so far as to make this interpretation.

It is interesting to note the speaker’s reaction to and repair of the slip. Most speaker will, after detecting an overt error, go through a repair sequence. In this case, there is a slight pause, a rapid truncation of the following words indicated by the ‘-‘ symbol, and then the articulation of the correct word with added stress on the final syllable to contrast it with the incorrect word.

Cameron was reading his answer from a script, something the leader will often do during PMQs as many of the questions have been anticipated in advance and answers prepared. In the first slip, there was little reaction from the chamber since it is a natural part of human speech for slips to occur; most of the time the listener’s mind filters out these slips

While a slip of the tongue is not an uncommon occurrence, making the same slip on the same word in quick succession can be embarrassing and the reaction from the chamber with noise and some laughter indicated that many had picked up on the irony of the slip: was Cameron really wishing he could go after workers instead of business leaders?

In the second slip, the repair procedure is slightly different to the first. The speaker immediately utters the correct word without any intervening words and there is no noticeable pause. The articulation of the correct word however is relatively fast (> <) indicating perhaps the speaker’s desire to repair without being noticed. No such luck! Once a mistake is out there is no taking it back!

There have been some very embarrassing slips of the tongue in the past. Here is one of my favourites:

Hansard, the official publication of the transcripts of parliamentary discourse, of course does not record these slips of the tongue. The performance aspects of speaking appear to have been airbrushed out of history!

We continue to name and shame eligible employers when the investigation has been closed, something which did not happen before.

On top of our national living wage, we are going after unscrupulous employers and making sure that people get the deal that they deserve.

Line 14 provides an example of a ‘revealing ah’, a specific type of reaction from chamber members in support of the current speaker usually when some information has been revealed which might be surprising. The chamber members are not surprised at all; it is mock surprise.