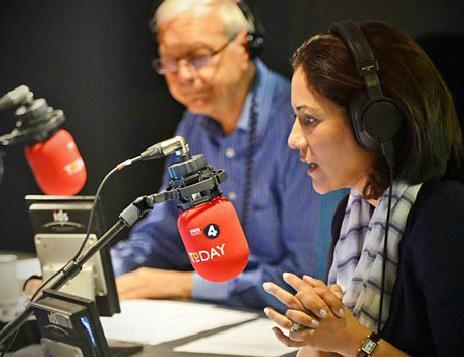 Political interviewing can be a frustrating affair when the politician being interviewed refuses to answer directly the questions put to them. John Humphrys, a BBC radio 4 presenter and interviewer, gave Chris Grayling, a Conservative MP, a grilling on the Today programme when he questioned him over recent remarks by Boris Johnson, one of Grayling’s colleagues. Johnson had recently compared the European Union to Adolf Hitler in their attempts to create a ‘super state’. Humphrys wanted to know whether Grayling agreed with this position or not. However, Grayling was not ready to give a direct answer and an interesting game of cat and mouse ensued which makes for a useful CA analysis. (The full transcript is given at the end.)

Humphrys was trying to engineer an answer from his interviewee that would generate a TH (Tomorrow’s Headline). A TH in this context would be something along the lines of ‘yes I do agree with Johnson’ or ‘no I don’t’, which could potentially create a headline story. The basic question and answer exchanges went something like this however:

This may seem like an incoherent conversation but it only goes to reinforce my contention that an interviewer can ask any question he or she likes, while an interviewee can answer in any way they see fit. There is no way that we can force someone to say something. Grayling, a seasoned politician, was not going to give Humphrys his TH.

A conflictual question is one in which all possible (direct) answers attack ‘face’. So when Humphrys (JH) asked Grayling (CG) whether Boris Johnson was right in comparing the EU to Hitler, this created a conflict for the politician. To answer ‘yes’ would be to align himself with this proposition. To answer ‘no’ would be to criticise his colleague Johnson who is on the same side as Grayling in the EU referendum debate.

the “intentional use of imprecise language” (Hamilton & Mineo, 1998) designed to avoid a loss of face.

A typical response to a conflictual question is for the politician to equivocate. Rather than giving a direct answer to Humphrys question, Grayling answered tangentially talking instead about Johnson’s position as a historian. This line of equivocation continued throughout several question-answer exchanges.

The nature of a conversation can often be understood by the number and degree of interruptions and overlaps that occur. An overlap in conversation is when two (or more) interlocutors talk at the same time. In lines 13-14 below, CG is speaking but JH starts talking at the same time and the two interlocutors overlap for a few seconds. This overlap is can be classified as a competitive interruption since there is no obvious TRP (transitional relevance place) for the interruption.

Latching can also indicate the competitive nature of the conversation. In lines 157-8 below, CG is speaking. As he finishes, and without any pause, JH starts talking. Normally we would expect a brief micropause between one person finishing their turn and another person taking up theirs.

Grayling, by contrast, often left a brief pauses before he took up his turn indicating that he was being less competitive.

At various points in the interview, Humphrys uses conversational devices in order to try and get Grayling to answer more directly. In line 14-15 he explicitly reminds Grayling of the question that was asked:

Line  26 appeals to human decency ‘with the greatest of respect’ – in other words ‘you are not being respectful in the answers that you are giving’:

In line 64 Humphrys let’s out an audible sigh to signal his displeasure at the answers Grayling is giving:

Despite all of these, Grayling continues to equivocate on the basic question of whether Johnson was right or not to say what he said.

Humphrys allows the interview to close when he runs out of time and realises he is not going to get a direct answer to his question. He allows Grayling some time to make a few general points (162-175), leaves a pause (line 176 in contrast to previous interruptions) before thanking him (177).

Listen to a recording of the interview

Link to the Today programme http://www.bbc.co.uk/programmes/b006qj9z