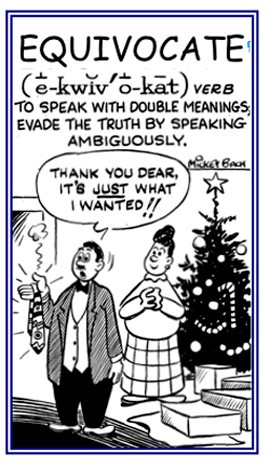 Editor: This is part 2 of the blog on the BBC Question Time programme. Part 1 is here.

Overlap occurs when one of the speakers interjects before the previous speaker has finished speaking. While competitive interruptions are usually accompanied by overlap, there is more to be gleaned than attempts to wrestle the floor. The exchange below brings some interesting facts to light:

Notably, IO begins her turn before FB has finished hers. IO does not need to hear the question, but is ready to assume her turn as soon as she has been selected to speak. This move suggests that IO is already familiar with the question and has perhaps rehearsed this.

Montgomery (2001: 403) finds that broadcast discourse is rarely authentic and spontaneous, but largely televised and rehearsed. Political interviews and discussions showcase this at times, since politicians and interviewers must be prepared for any difficult questions. Interviewers ask conflictual questions, where all possible replies threaten the interviewee’s face. Despite these questions, the interviewer needs to maintain neutral footing, a stance which favours neither side during the debate.

Maintaining neutral footing is usually achieved by attributing the question to someone else. Goffman (2003: 154) identifies three participation frameworks: the animator who literally utters the words, the author, who originally posed the question, and the principal, whose viewpoint is expressed through the question. FB and IO serve as the animators for the questions. They may or may not be the authors who originally came up with them, but they are most likely not the principals, as they are expressing the views of political parties.

However, the usual art of deflecting responsibility by attributing the question to a different author or principal is lacking in this exchange. Combined with the audience’s applause being synchronised with IO’s statement when challenging DA, the interviewer does not appear to maintain neutral footing. FB’s preference to skip connect to a previous question instead of letting DA address the audience questions, along with the competitive interruptions makes the interviewer’s neutral stance easy to question.

Conflictual questions, as described above, are a fundamental element of political discourse. But since all possible answers may threaten face, politicians tend to avoid direct answers and use equivocation strategies. In the following exchange, DA uses two of these strategies when faced with these questions:

In this question, DA implies that the question has already been answered. If a second referendum is part of their policies, then it stands to reason that Corbyn is not against it.

In the second half of the adjacency pair, FB insists on the question in an attempt to probe DA further, which results in a more aggressive reply. This time, she attacks the interviewer, a strategy often employed by Thatcher and then repeats the same answer as in the first half.

Additional equivocation strategies are evident in this exchange:

IO’s question of how DA’s party expects to win despite their lacklustre performance in the polls is met with applause from the audience, which implies the question was successful at representing the principal behind it. DA responds by making a political point, the seventh strategy in Bull’s taxonomy. However, DA is not given a chance to respond to the simpler questions posed by the audience. Bull’s (2003: 593) quantitative research has found that politicians tended to reply to members of the public up to 73% of the time, whereas they equivocated 47% of interviewers’ questions. Questions from members of the public tend to cause fewer communicative conflicts, explaining the higher response rate.

Televised political interviews are rehearsed and do not represent ‘fresh talk’, but rather institutionalised discourse. FB holds special rights to the floor which she exercises to select the next speakers and holds more power in competitive interruptions, acting as the default speaker. This means that the turn-taking mechanism will almost certainly never devolve to the lowest rank where the current speaker may continue, as FB is tasked with probing or selecting another speaker if this happens. The negotiation of the floor is under her command. However, the lack of attributing conflictual questions to an author and the competitive interruptions bring the neutrality of the debate into question. DA’s response with equivocation strategies is expected, but the fact that she was not allocated a turn to reply to the public’s questions foregrounds the equivocation.

Stenstrom, A. (1994) An Introduction to Spoken Interaction. London: Routledge