Never having your cake and eating it 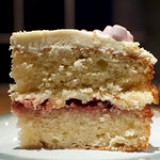 Imagine you have a craving for cake and someone tells you there is free cake next door. You rush out of your house to see a sign on the gate saying ‘cake’ and pointing to the neighbour’s house. You pull the sign off the gate and try to eat it. You will be sorely disappointed because the sign is not the cake.

Realising your mistake, you rush into the neighbour’s house only for them to tell you that they made the cake this morning and put it in the fridge next door. You run next door only to find a note next to the fridge saying the cake is being given out free of charge at the local park. You rush to the park to find that only cake boxes remains and all the cake has been taken. But someone tells you that the person who just left took two pieces and might give you a piece. You approach the person only to find that he gave the second piece to his friend. You approach his friend only to find that she has eaten the cake. You get no cake!

The relationship between language and the physical is a little like the relationship between you and the cake. If I say ‘I made you some cake’ it is clear that the word ‘cake’ itself is not the cake. You cannot eat the word and feel satisfied. So I say ‘the cake is in the fridge’ and you go to the fridge expecting to find it but you little sister has taken it just before you get there. Your sister tells you she gave it to your brother who gave it to the cat who has eaten it all.

We sometimes assumes that language just points to the objects it seems to pick out. But there is a paradox in language. We can talk about cake at any time and mention the word ‘cake’ in our discussions but I do not think that any of us would start salivating just at the mention of the word. There is no causal connection between the word ‘cake’ and the sweet dessert it purports to point to. Language is not the actual object it points to and everyone understand this. The relationship between language and the objective world is often said to be one of representation. Language represents what is in the real world, like signs on the roads point to towns and cities.

However there is a problem with this conception of the universe I believe. The problem lies in the misconception, or fallacy, that language represents the physical world. What I think language does is give a hint that there is a physical world out there, but every time we feel we are approaching it we find it has moved on and we are sorely disappointed. Like the cake that you chased at the beginning of the piece —from the neighbours to the fridge to the park to the friend — we chase language believing that it is pointing to the real world and that the real world is ‘just around the corner’ after the next sentence.

For a moment let’s assume that language does not represent the physical world. If it does not, then what does it represent I hear you asking. Well nothing, nothing at all. Why does it need to represent something? If we accept language for what it is (nonrepresentational) then we can understand that it is just creating worlds, linguistic worlds, in our minds every time we speak, write or think.