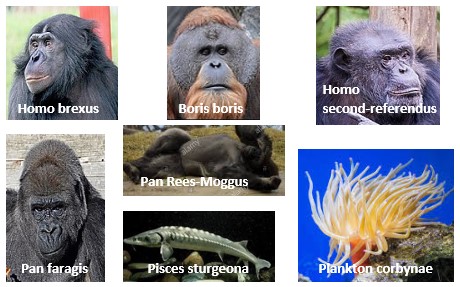 Brexit has not only changed the political landscape but has also given rise to a number of new species in the Homo genus according to scientists. Here is a quick run through some of the newcomers.

– an ancient species that almost went extinct until Homo cameronda helped revive its fortunes in the 2016 referendus. The species has rapidly grown in numbers and habitat since this time.

– a new species of politician that arrived on the scene immediately after the split with Homo brexus in 2016. Some dispute its name as Homo peoples-votus.

– a lone species that readily interbreeds with the Hominids.

– a gentle creature which can often be found swaying passively in the breeze near thermal vents produced at manhole covers.

– an Old World species that inhabits mostly Britain and the Americas. The species has been on the retreat in Europe.

– despite its lineage from Homo erectus, this creature prefers to spend most of its time lying on its back.

– native only to Scotland, this species avoids all contact with its southerly neighbour Pisces albion (also known as taking-the-pissus).