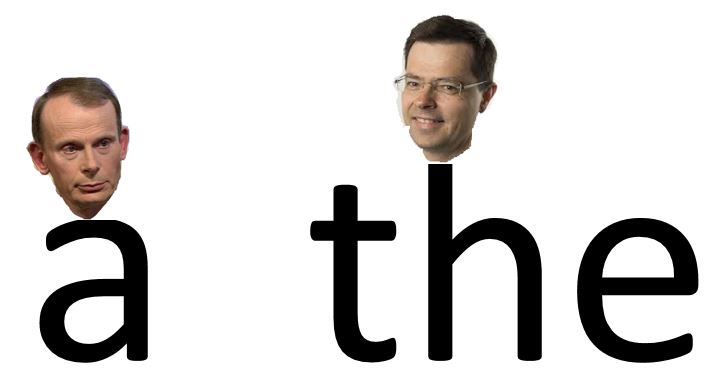 It seems strange that two of the smallest and most commonest words in the English dictionary could cause confusion between interviewer and interviewee but that is what ‘a’ and ‘the’ seemed to do on Sunday when Andrew Marr interviewed James Brokenshire, the Secretary of State for Housing, Communities and Local Government, on the BBC.

Marr (AM) starts off in 03 by referring to ‘a single market’ but Brokenshire (JB) talks about ‘the single market’ (line 06). Marr picks up on this and clearly signals his intention of referring to the non-specific market by putting stress on the definite article ‘a’ in line 08.

Brokenshire however refuses to engage with the concept of ‘a’ single market and instead talks about ‘the’ single market in line 11. Notice how Brokenshire, unlike Marr, never puts special emphasis on the article – he doesn’t want to highlight the fact that they might be two different concepts; it is convenient for him to ignore this.

A period of negotiation ensues in which Marr tries to reiterate that he is talking about ‘a’ single market and not ‘the’ single market. Several times he marks the article with special emphasis and even states in line 20 that he ‘dropped the definite pronoun’. (It is the definite article, Mr Marr, not a pronoun! But we will excuse that in the midst of a Sunday-morning tussle with a politician.)

Brokenshire however continues to talk about ‘the’ single market as if it is the only one that could ever exist. Marr ruefully in the end (lines 43-47) comments on why people get frustrated with this small but significant difference, before moving on.