Political commentators and journalists all have their own idiosyncratic styles when interviewing politicians. Emily Maitlis, the BBC Newsnight  commentator, often shows exasperation and incredulity in her voice through sweeping intonation falls and facial expressions. Here is a brief analysis to show how she uses linguistic features to signal this attitude.

I have taken four short samples from her Newsnight interview with Alok Sharma, Conservative MP, on the eve of Boris Johnson’s accession to party leader and Prime Minister. In samples 1 and 4, which book-end the interview, the voice is calm showing little emotion. In samples 2 and 3, Maitlis raises her voice, and uses intonation and facial expressions to signal what I call ‘exasperation’. This acts to signal urgency and incredulity in her questions, which is designed to put the interviewee on the spot.

The average pitch of the voice for each sample is given in the table below. Pitch is a measure of the vibration of the vocal folds. Note how Maitlis raises her pitch in samples 2 and 3 to signal the exasperation and incredulity in her voice. She also uses sweeping rises and falls in the contour of the intonation over the utterances to signal this.

The four samples can be listened to here:        External link to audio clip

Sample 1 is taken from the start of the interview when Maitlis is asking her first question to the interviewee. While there are rises and falls in the pitch of the voice, these are not marked. 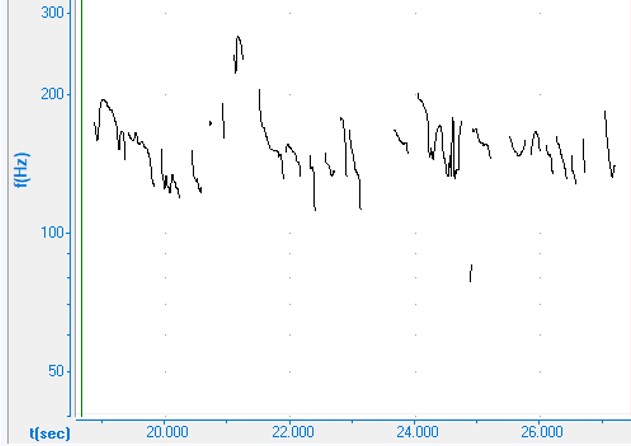 Sample 2 is mid interview and Maitlis is now getting into her stride. The average pitch of this sample has risen to around 240 Hz and the pitch trace shows sweeping falls from high to low.

Notice how the fall and rise of the intonation contours in the pitch chart below are much greater than in sample 1 above. For example, Maitlis uses the phrase ‘civil unrest’ twice each time with a high fall from over 300 Hz to less than 150 Hz to emphasise the term and show incredulity in her voice.

In sample 3, Maitlis continues with her exasperated style of voice highlighting key terms such as ‘suicides’, ‘homelessness’ and ‘food bank use’ among others. 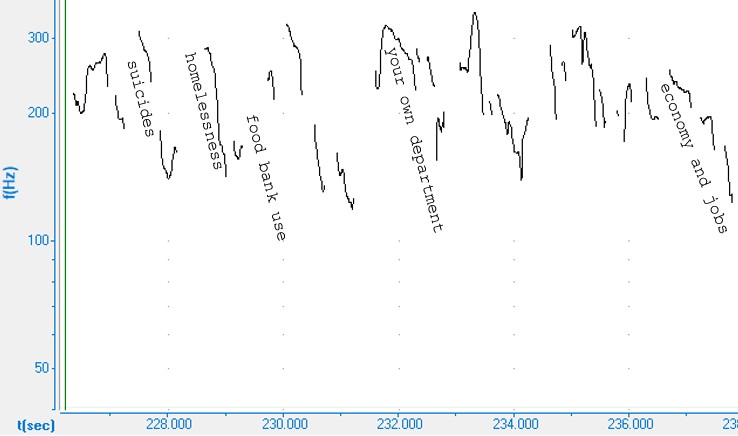 Sample 4 is positioned after the interview with Sharma has finished as Maitlis moves on to the next news item. She signals this change with a decrease in pitch to about 170 Hz on average and less marked intonation falls. 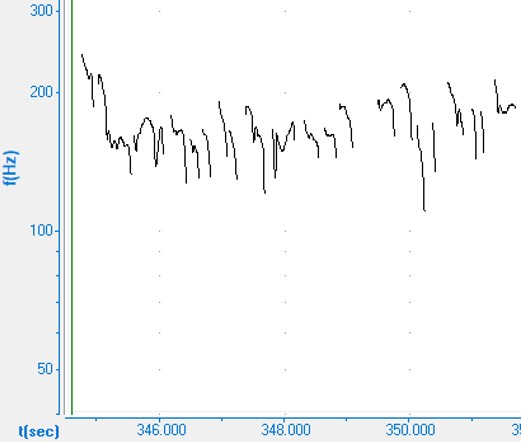 Signalling exasperation and incredulity is not performed simply by intonation. There are a range of features which combine to signal this attitude. Maitlis uses facial expressions to support the intonation as well as laughter and vocal noises. Here are some screenshots to illsutrate